I’m often asked by pregnant moms if I believe whether or not what mothers eat when they’re pregnant affects their kids’ tastebuds and food preferences. It’s a question I’ve thought about greatly since I myself was first pregnant and based on my own experiences with two children who are now almost 8 and 6 years old, I have observed that many of the specific tastes they have gravitated towards since they could first eat solids are ones I consumed frequently when I was pregnant (and still do for that matter). Sure, some of their tastes could be inherited and others have likely been influenced over time by different things like what I prepare for them and what they see me and my husband (or their friends) eating, developmental stages and psychological hangups, but there is definitely research that supports a direct connection between what mama eats and the foods their offspring likes.

My kids obviously don’t have the exact same tastes (there are certain foods one of of them loves that the other completely avoids), but there are more similarities than differences between them_ both of my kids are avid Brussels sprouts eaters (they were my veggie obsession when pregnant with both kids); I indulged on ice cream until I was blue in the face when my son and daughter were in utero and that’s frequently their treat of choice (though kids loving ice cream is not as unusual); and from the time Chloe was just a little seed in my belly, I couldn’t get enough of shellfish. Given that last one, it’s not surprising to me that whenever we go to a restaurant or our seafood purveyor at the farmers’ market she is all about the clams.

At our most favorite family restaurant, they always make her a big bowl of clams in the most delectable white wine broth (don’t worry, the alcohol completely burns off leaving only the delicious flavor) and when we traveled to Italy this summer she always chose clams with pasta over any other dish on the menu. I’m pretty certain I know where the seeds of that particular food love were planted.

To indulge Chloe’s clam passion, I started making this Clams with White Wine Sauce dish for her at home. It couldn’t be easier to prepare and now she says she prefers Mommy’s version to the one from our favorite restaurant (I’ll gladly take that compliment!) If you’ve got wine, garlic and some mussels, you have everything you need to make a three ingredient meal that can be on the table in less than 10 minutes. 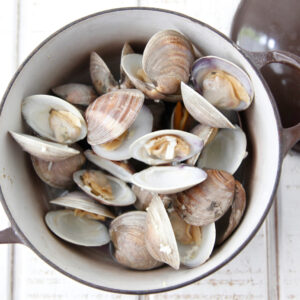