Everyday I try to visit different message boards on the web to see what moms are talking about. Lately, I can’t get over the one common obsession that moms are asking about everywhere_ How to cook a pumpkin! For a country obsessed with Halloween and pumpkins, it’s kind of ironic that we rarely cook with them, unless its using pumpkin out of a can on Thanksgiving.
Now, I admit it’s something of a mantra at weelicious that I don’t like using canned foods in general, but canned pumpkin is an exception to the rule. I once read Martha Stewart say that you shouldn’t waste your time cooking fresh pumpkin when making pumpkin desserts (because it’s very hard to get the exact flavor you want) and I believe she’s correct, but roast pumpkin on its own with a touch of cinnamon and maple syrup is heavenly.
When I was living in Australia years ago, I ate pumpkin every few days. Pumpkin is as common to cook there as sweet potatoes are in the States. The pumpkin down under was so sweet and creamy, I wanted to try and replicate the flavors that I remembered. There are several types of pumpkins this time of year at my farmer’s market, so it’s kind of hard to tell which one to buy, but I’ve found you can’t really go wrong no matter what you choose. I bought several varieties last weekend such as “autumn gold” and “sugar”, which are both high in vitamin A. The cooking time will vary a bit depending on the size of the pumpkin you buy, but whatever you get, with this recipe it will be tender and delicious. 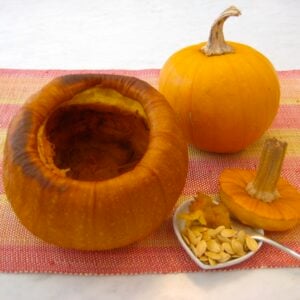