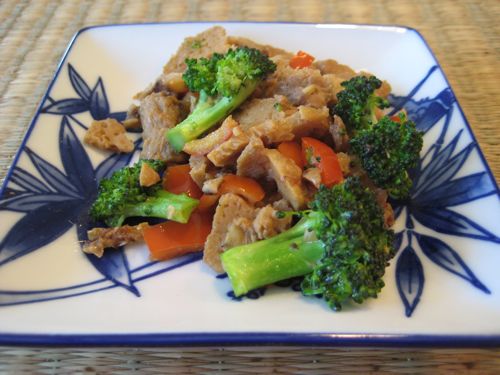 I remember the first time I encountered seitan. It was at a vegetarian restaurant in New York City. So many of the ingredients on the menu were completely foreign to me and I felt like I was butchering their names. Seitan for example. Was it, “see-ten”, “s-e-i-ten”….oh, whatever!! Finally, the waiter came to my aid and told me that it was pronounced “say-tan”.

Anyway, seitan isn’t exactly a common ingredient in American kitchens — but luckily most health food stores carry it. Seitan is a great alternative to meat and its versatile texture is perfect for absorbing the full flavor of sauces and has a texture similar to chicken, although a bit spongier. Although it seems like and odd choice, this was my total craving when I was pregnant with Kenya. I wanted seitan for breakfast, lunch and dinner. That’s probably the reason Kenya loves it so much. I think he consumed pounds of it in utero.
Seitan, also know as wheat gluten or “wheat meat”, is made by rinsing away the starch in wheat, leaving a high-protein gluten behind. Seitan is popular in vegetarian cuisine because of its unique ability to replicate the texture and flavor of meat. It’s also easier for little ones to chew then beef.

When I made this dish, I had so much fun telling people it was chicken stir fry. Everyone got that it wasn’t chicken, but couldn’t figure out what it was. They were shocked at how delicious it tasted and couldn’t believe they hadn’t tried seitan before.

This dish only take minutes to prepare which is an added bonus. I like to make plenty to have leftovers for at least a day or two. Of all the people that tried it, though, Kenya seemed to enjoy it the most!

We used these to make this recipe_ 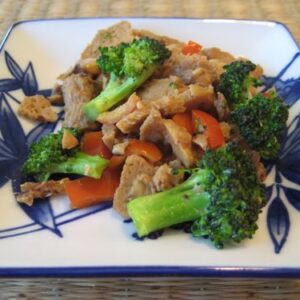