Vanilla Cupcakes in a Cone and Cookbook Giveaway!

Seriously? An ice cream cone filled with light vanilla cake and topped with frosting? I can think of few things that would make a kid more happy than this treat. It’s like if two members of dessert royalty got married and had babies — the result would be these Vanilla Cupcakes in a Cone. My kids lost their minds when they got to make them with me. Where, you may ask, did this ingenious idea (which I wish I had thought of) come from?

Recently I got a copy of the new Handstand Kids cookbook, Baking Around the World, and told Kenya and Chloe that they could pick out any recipe they wanted for us to bake together. They were over the moon. Both of my kids are huge fans of the Handstand Kids and so we poured through the book together looking for a recipe while the kids talked about their favorite HK characters and looked at the cute illustrations of them throughout the book. I was getting excited myself, reading recipe names like Indian Biscuits, Raspberry Rugelach Twists, Traditional Mexican Chocolate Cake and Red Velvet Beet Cupcakes (my own little contribution to the book!) which all sounded good to the kids, but when I suggested Vanilla Cupcakes in a Cone, they were sold.

Even better, this recipe is so simple that Kenya and Chloe were able to do everything short of putting them in and pulling them out of the oven. When the cupcake cones were cooled and frosted we had a little birthday party celebration for our friend, Nilva. You should have seen the smiles on their faces and total empowerment they experienced carrying the cones with candles over to her while recounting how they had made them on their own. 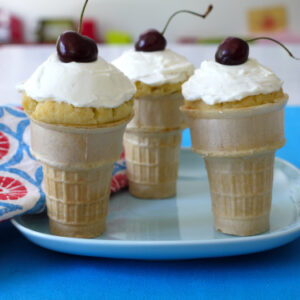 Vanilla Cupcakes in a Cone