Stuffing is one of those Thanksgiving foods that I’ve found you don’t have to twist a kid’s arm to eat. I mean come on, the base of it is bread! With a crispy top layer and fluffy savory texture under the surface, this stuffing (or dressing) is pretty much your turkey’s best friend this Thanksgiving. This stuffing recipe in particular is my kids’ favorite one, hence why I named it Kid’s Apple Sausage Stuffing!

I think stuffing might be my favorite part of Thanksgiving. I’ve come up with several variations over the years like Cornbread Cranberry Stuffing and these super fun, kid-friendly Apple Sausage Stuffing Bites.

There are tons of variations on the ingredients you can put in your stuffing. Cornbread, wheat or white bread, fruits, vegetables, herbs, the list goes on…But the mixture of ingredients in this Apple Sausage Stuffing is truly geared for little ones taste buds (and secretly mine, too!).The sweetness from the apples in this recipe nicely pairs with the salty sausage. Combined with the celery, onion and sage, this dish will make the whole kitchen smell amazing. And it tastes even better!

I love this stuffing recipe so much. I must admit it gets made several times a year – not just on Thanksgiving. It pairs really well with any roasted meat or poultry and the flavors really compliment so many other foods! Don’t be afraid to work this into one of your weeknight dinners!

Is Thanksgiving your favorite meal of the year like me? I’m super excited even though this year will be a little different than usual, I’m still looking forward to gathering around the dinner table with my family. 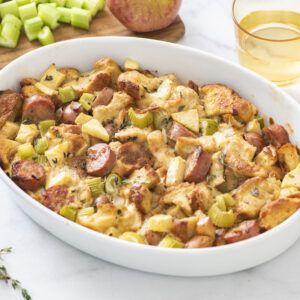