Cinnamon Roast Butternut Squash will make your kitchen smell like fall! Tossing the squash in cinnamon and maple syrup and putting it back in the oven for a few minutes adds a heavenly sweet flavor to this already delicious fall vegetable.

I often get asked by people if my kids eat everything. Well, everything is a big word. I’m sure if I sat them down with a big plate of chopped liver and super stinky cheese they would opt to starve, but overall they’re both pretty good about eating a diverse range of foods. Still, that doesn’t mean there are not times of major protest.

As babies, they could not get enough of my butternut squash puree. Naively I assumed they would be fans of it for a lifetime. Nice try. Somehow as they entered toddlerhood their tastes changed and squash lost its luster. I’m an obsessive squash eater — acorn, butternut, delicata, kabocha, you name it, I love it — so having children who apparently did not inherit my taste for it was all the more bewildering to me.

Squash recently started showing up again at our farmers’ market and I’ve been buying and cooking it non stop. I never give up on trying to get Kenya,Chloe and Gemma to eat it, but for about two weeks I was met with the same turned up noses and choruses of “I don’t want it” and “I don’t like that”. Then one night, I had an idea. I pulled the kids’ stools up to the kitchen counter and told them they were in charge of making this dish. I put some diced squash on a baking sheet and let them toss it with a bit of oil. Then a few minutes before it was ready I let each one go nuts with the cinnamon shaker before having them pour on a good amount of maple syrup and use their “pinching fingers” to sprinkle on a bit of salt. Minutes later the kitchen smelled like just how you’d imagine fall should.

Yet even after all that, they still resisted eating their creation. I don’t like to push them, so instead I put out two little dishes drizzled with a touch of maple syrup (my husband claims it was more like a full pour, but who’s counting) and suggested they try dipping their squash into it. Four helpings later, Kenya declared that he loved butternut squash and has requested it several times since.

The moral for me? Just when you think it’s time to give up on your kids tastes and throw in the towel with a certain food, it’s always worth one more try!

Do your kids eat squash? Let me know in the comments! 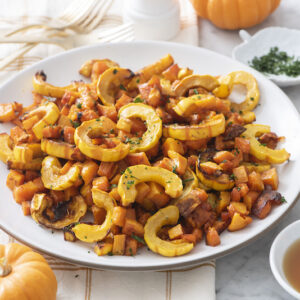 Tossing the squash in cinnamon and maple syrup and putting it back in the oven for a few minutes adds a heavenly sweet flavor to this already delicious fall vegetable.
No ratings yet
Save RecipeSaved Recipe! Rate Recipe Print Recipe
Servings: 4
Author: Catherine McCord
Prep Time 5 minutes
Cook Time 45 minutes
Total Time 50 minutes