This Lightened Up Spaghetti Carbonara recipe packs all the flavor of its original counterpart but is much healthier.

I feel like for most of us the words “healthy” and “light” really mean “boring” or “tasteless”. Whenever I eat diet foods that are supposed to taste like their fully loaded counterparts, they usually tend to be more reminiscent of cardboard than lighter versions of the original.

I told my husband I was going to work on a recipe for a healthy carbonara, and he understandably snickered. After all, if you’re going to eat something called carbonara, it better well taste like three darn good things – parmesan, bacon and pasta – and “light” is not an adjective I’d use to describe any of those foods! So instead of substituting ingredients, I simply use less of the offending ones (except cream, that one doesn’t make the cut here). I also like to use a combination of eggs and pasta water to help retain the lusciousness and creaminess of a classic carbonara.

On the day I was making this, my hubby came charging into the kitchen, having caught a whiff of the cooking bacon wafting through the house. However, as soon as he realized that this was my “carbonara light” experiment, he retreated, thinking it would taste terrible. After a bit of arm twisting, I succeeded in getting him to try it. Three bowls later, hubby asked that I please remove him from the kitchen before he ate the whole pot.

Which reminds me, this dish serves six, but if you eat it all on your own, it’s definitely no longer qualifies as light! It’s definitely hard to resist though! If you’re looking for other light pasta try my Wild Mushroom Pasta, Lemon Spaghetti with Toasted Walnuts or Pasta Primavera recipes!

Let me know if you try any of my recipes by tagging me on social media, @weelicious! 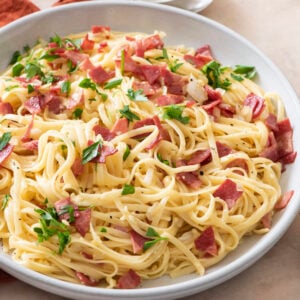