Quick Pumpkin Cinnamon Rolls live up to their name. They’re super easy, quick and scream fall with a swirl of cinnamon cream cheese in a pumpkin dough.

Some things never change. Once again this fall, I bought more cans of pumpkin puree than I knew what to do with. As I’ve written before, I have a habit of getting a bit overzealous whenever I start seeing organic pumpkin available in the supermarket. I basically wind up buying out the store, leaving me badly in need of some creative ideas for what to do with it all.

While homemade pumpkin puree is always great, there’s just something about the ease and creamy texture of canned that I just can’t resist. It seems to say “holidays” to me more than almost any food. So do cinnamon rolls. Mmmm. There’s not much I wouldn’t do for a freshly baked homemade cinnamon roll right about now. However, there’s the ease issue again. I don’t normally have time to make a yeast dough, so I don’t make them that much.

At least that was the case until I started making these super quick Pumpkin Cinnamon Rolls, simultaneously fulfilling my craving for two of my favorites by featuring a yeast-free recipe and utilizing all that surplus pumpkin puree. Creamy swirls of cinnamon cream cheese wrapped up in a tender sweet pumpkin dough make these rolls an undeniably special fall delight.

Kenya ate four of these rolls for breakfast the first time I made them and Chloe and Gemma were not far behind. Lucky for me I’ve got three kids who love anything pumpkin and as long as I can rely on them, I can rest assured all those cans of pumpkin won’t go to waste. If you’re looking for more pumpkin recipes, there are tons on the site including Pumpkin Spice Oatmeal in the Crock Pot, Pumpkin Waffles, Pumpkin Apple Muffins and Pumpkin Pear Bread.

Make these Quick Pumpkin Cinnamon Rolls for your next weekend brunch and let me know what you think by tagging me on social media! 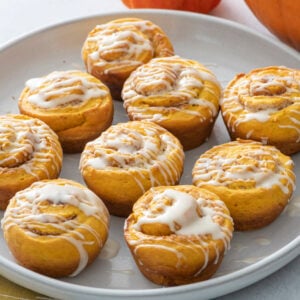