Vegetarian Spring Rolls are stuffed with a variety of vegetables and then pan fried to get that unbelievably delicious crispiness on the outside. They’re actually easier to make at home than you might think!

We have a friend who opened a delivery-only Chinese restaurant called — of course — Secret Chinese Delivery. The menu is based on the beloved New York City Chinese food he grew up on as a kid. We visited our friend at another one of his restaurants a few years ago, and he let us sample a few of the dishes he was working on for the menu. One of them was Vegetarian Spring Rolls stuffed, among other things, with a secret ingredient generally not seen on most Chinese restaurant menus — kale.

Not only were the spring rolls delicious and packed with tons of diced vegetables, but they were super crispy too. After watching the kids gobble up one after another, I decided that I wanted to make my own homemade version. Instead of frying them to get that crispy texture, I sautéed the spring rolls in a few tablespoons of coconut oil which not only made them crunchy, but imparted a really unique, tasty flavor.

I know it seems a bit overwhelming to make homemade Vegetarian Spring Rolls, but it’s actually easier than you might think! With a little practice, you’ll be rolling these like a pro. I broke it down step by step with photos so you have a visual guide!

Step 1: Start with a wonton wrapper on a work surface in front of you with the diamond shape facing you.

Step 2: Spread the filling across the wonton wrapper.

Step 3: Fold the sides in using a drop of water to adhere the two edges together.

Step 4: Fold the bottom up covering the filling.

Step 5: Roll up from bottom to the top using a drop of water to adhere the wonton wrapper and make sure it’s all sealed up.

I hope you have time to make a batch of these dreamy veggie-filled rolls for your Meatless Monday! Let me know what you think by tagging me on social media! 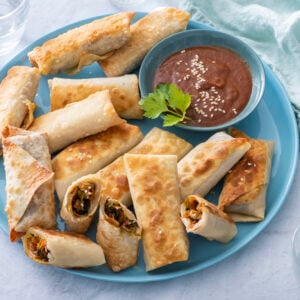