This fudgy and chocolatey Skillet Mexican Brownie is so decadent and delicious after one bite you’ll be asking for more!

This Skillet Mexican Brownie is like a chocolate explosion in your mouth! The cocoa powder and the chocolate chunks in the batter pack a powerful punch for any chocolate lover out there. The secret ingredient that makes these brownies so top notch is a touch of cinnamon that adds a subtle pop of flavor. They’re best served fresh with a scoop of ice cream on top, but can also be frozen after they cool to have an indulgent treat ready to go when you’re in the mood!

When I made this Skillet Mexican Brownie for the first time, I think it was gone in 10 seconds. Everyone grabbed a spoon and went to town eating the chocolatey goodness straight out of the skillet! While I don’t encourage a dessert this decadent every night, a special treat every now and then is a-okay with me! If you’re able to not eat the whole skillet in one sitting, you can store leftovers in an airtight container on your counter for up to 4 days, but it remains its freshest for 1-2 days.

If you’re a chocolate fiend like me, you’ve got to try these other chocolate recipes like Skillet Double Chocolate Chip Cookie, Chocolate Muffins, S’mores Cakey Black Bean Brownies or this Microwave Chocolate Chip Sea Salt Cookie for ONE! You could also take a slightly healthier route and put cocoa powder in your smoothies like in this Chocolate Peanut Butter Smoothie so you get all that chocolatey flavor and can feel a little better about all the other nutrients you’re getting while you drink.

I think this recipe is a great one if you’re looking for a small dessert for a birthday party or other special occasion. I’m requesting it for my birthday next month for sure! Not sure if I’ll be sharing 😉

Let me know what you think of this Skillet Mexican Brownie by tagging me on social media when you make it! 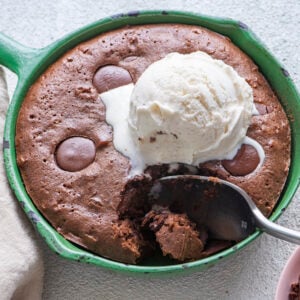